If you have been on social media the past few days, there is a high chance you have seen the social media campaign #StopYulin2015. When it first popped up on my news feed, I glanced at it and shrugged, this must be an anti-China propaganda hoax. It wasn’t until I read CNN articles and watched this short VICE documentary that I realized, Holy shit. This is real.

I share this with you because I’m tired of reading comments like, “Chinese people are barbaric.” “Avoid all things and people from China.” “Chinese people are so disgusting and horrible.” “Chinese thrash race really should be driven extinct, kill all of those motherfuckers.” (I’m not quite sure what this last comment means. But it was ranked as a top comment.) If you can’t tell, I have a low tolerance for ignorant generalizations and racist remarks (and bad English).

As a dog lover and a dog owner, can I picture my Kang Kang being Thursday night’s dinner? I named him. I bathed him. I walked him. It would be unthinkable. I winced at least 25 times throughout the 17 minute documentary, feeling sad that these cute, furry animals were being skinned, boiled, burned, and stewed.

As a Westerner of Chinese descent, could I be angry at the people my parents could laugh and converse with? No more than Indians spite those that eat the sacred cow. When is the last time you ate beef or bacon or pork? (If you are a vegetarian or vegan, good for you. You truly stand on higher moral ground.) As a Westerner, I know I have consumed countless pounds of meat, even with the knowledge of how unethical farm factories are. Much like the dogs in these videos, the cows, chicken, turkeys, and pigs Americans consume on a daily basis often come in similar conditions: crammed, diseased, parched, starved, mass slaughtered. Whenever I see a juicy burger I often think to myself, “Out of sight. Out of mind.”  Its presentation is packaged so aesthetically that I forget a fattened, malnourished cow sacrificed its life.

In many cultures, dog meat is a delicacy. Countries like Korea, Vietnam, Thailand, Switzerland, Canada, to name a few, also have records of human consumption of dog. Many countries view it as a gourmet cuisine, a cultural tradition, and an affordable dish filled with health properties. It is important to understand why people do the things that they do instead of attacking one’s culture or imposing one’s cultural values on another. VICE did a great job documenting the justifications of locals in Yulin:

According to ASPCA, there are about 2.7 million animals euthanized each year in the U.S. (1.2 million or 31% being dogs; 1.4 million or 41% are cats). These dogs are often cremated because they are diseased or homeless. If another culture thinks they could be eaten instead of cremated, then to each his own. Like the host mentioned in the documentary, at least they are wasting no parts of the animal. What I don’t agree with though is dognapping a master’s companion. If it is true that these dogs are pets that have a loving home, then I agree with the uproar. Dognappers are no less evil than kidnappers and human sex traffickers.

The second part I don’t agree with is the handling, or should I say torturing, of these dogs. At least when a dog is euthanized in the States, they are given a sedative and/or given the solution that is supposed to be administered fairly quickly and painlessly. If the supply and demand of dog meat never diminishes, then my only hope is that there could be a way to make already deceased dogs available. But I suppose this is no different than how pig pet owners feel towards carnivores like me who devour pork and bacon. 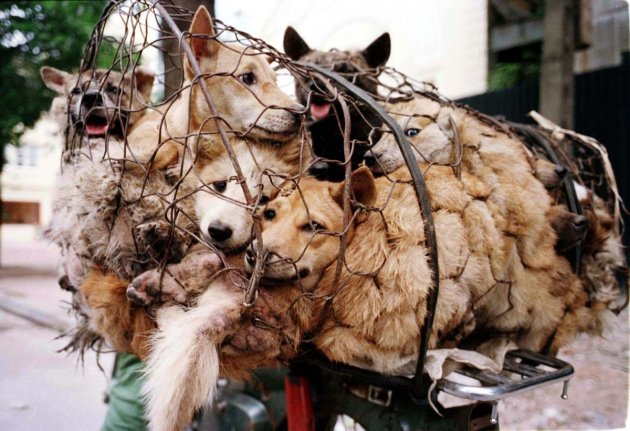 I think it is time to officially convert to a Pescetarian (baby steps),